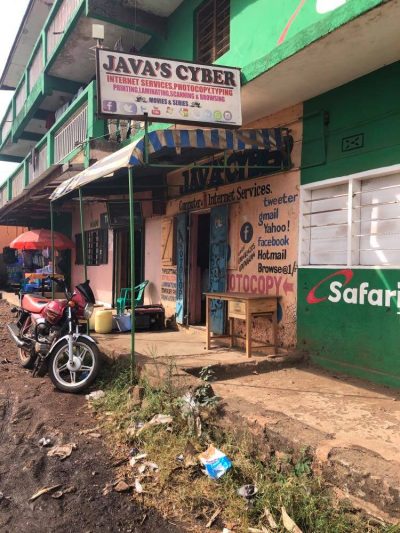 Yesterday Charity sent me on an errand. Her piki piki (motorcycle taxi), a sweet man named Andre in his early 60s took me into town. First stop at the internet café for printing documents.

On the way we get a call from Charity, and she needs zippers, which they call “zips.”  Andre takes me to the sewing material shop, and I quickly realize he’s going to need to handle this transaction because Charity has given him precise directions in Swahili that I would definitely bungle. Fortunately, the shop is across from the Java Internet Café.

Andre is her steady taxi on retainer for a reason—he loves to help, and he dismounts the bike and jumps right into the shop to engage in motor speed negotiations with the clerk before I can even ask for help.

I don’t understand much of what is being said, but I know the general context, and it seems he’s got it covered. So, this Mzungu (the name they call white people here) is standing outside the shop in the middle of town, drawing some attention. I hear “Mzungu” in whispered gasps behind me by small children as they cover their mouths as if they have seen an alien. Others make mocking sounds meant to sound like an Asian dialect. They think I’m Chinese, maybe on account of my dark hair.

In reality it’s much less demeaning than it sounds. Children treat us like they do celebrities all on account of the lack of melanin in my skin. Other kids are more bold, yelling out “How are you?” emphasizing the you, and giggling so uncontrollably they can’t hear my response. 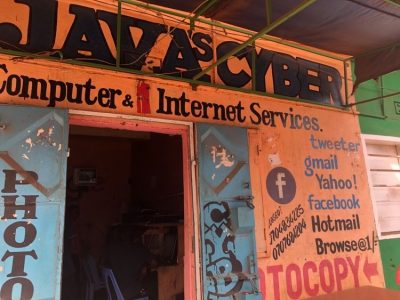 I have this really snarky response planned, “Jina langu si Mzungu. Jina langu ni Cherie.” Which basically translates, “My name is Cherie, not white lady.” I usually have to have Charity say it to them because they just can’t get their head around the fact that a white lady is speaking to them in Swahili, and well, it just blows their mind so much they can’t understand me, no matter how perfect my Swahili.

For those of you in mental health or education you know this is more than a smart aleck response. It’s an exercise in empathy, an attempt to challenge these children to also see past labels and stereotypes to our shared humanity.

When they listen, and this often only works with children I see repeatedly, they learn my name. Cherie is a hard one here and at home. Like many kindergarten students back home, my name usually sounds more like, “Shelly,” which sounds so sweet, I’ve almost decided to change my name officially.

For some reason zips are taking a while because everything seems to take a while, and I smile politely and gesture a formal greeting of a half-hearted wave at those loitering. A nod and wave usually suits the uncomfortable situation without being rude. The brief acknowledgment allows us to stare in silence.

I divert my eyes from theirs and begin reading the storefront signs around me full of misspellings and delightful ironies such as the “Tweeters” sign on the Cyber Café wall meant to notify customers that they could use Twitter at the Java Cyber Café. Also funny to me because the internet café doesn’t serve coffee or any other food for that matter, but it does a heck of a job printing in color for a mere 15 shillings per sheet. 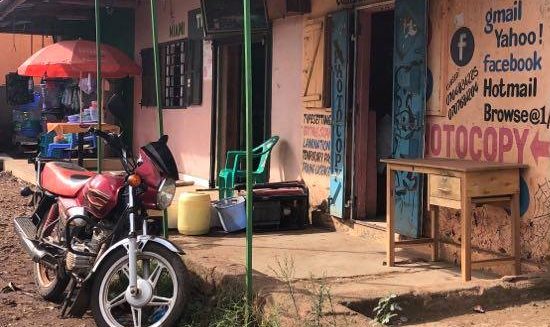 I’m all settled in to my mild dissociation when a deep, hollow voice jars me from my daydreams.

“Hello, and where are you from?” spoken in a perfect British dialect that sounds both out of place and overly confident for a man sitting in a plastic chair loitering in front of the sewing shop.

His introduction is both disarming and intimidating. Andre is still haggling, waving the zips with enthusiasm and pointing to the inventory behind the counter, so I might as well entertain this conversation.   The alternative could get ugly, insulting a man I have to continue to share a small space for the next 10-20 minutes.

“I’m from America,” I reply offering as little information as possible. I’m sure he can already figure that out by my accent, my obnoxiously bulky, ugly Asics and other things sufficiently awkward and out of place.

“Of course,” I mean which state?” In the midst of a loud, chaotic space, he sounds like he’s talking to me from a bar in a James Bond movie.

“I’m from Ohio,” I’m not being rude giving him this short response, but I am intentionally being vague. I learned a long time ago not to brag about Foothold to strangers here, which takes some restraint, but it has also become a bad habit hard to break when fundraising back in the US.

I can tell he’s annoyed, not getting the information he wants. He pauses, and leans towards me, “So what exactly are you doing here?”

I stand unmoved in part  to avoid giving him the slightest hint that he’s getting to me, and there’s little room before I trip and fall off the crowded storefront step.

This is the big question I am in fact trying to avoid, of course. I’m on a visitor’s visa, so I have to be careful with the words I use. I can’t say the word “work,” so I explain that I’m a “board member, visiting our projects” which is the line stamped in my visa application, a line I’ve rehearsed, yet it still opens me up for more questions…

Dang it, I think to myself, Not exactly because being an NGO is a complex and costly label that we’ve been advised not to use here.

“We’re a charitable business,” I correct him, still trying to be short and vague, but knowing full well I’m getting sucked in, hoping to stall long enough for Andre to finish with the dang zips!

At which point Andre miraculously interrupts and shows me the zips that are unfortunately missing vital parts. I tell Andre what needs correcting, and that gives me a little diversion but prompts the stranger to get to his point, knowing we’re about to finish this transaction and leave.

He takes a breath, “So…” again he pauses, “let me tell you about what I do…” with this he rambles about mentoring youth and “doing projects” (everyone says they do this stuff to Americans), “So how do I, let’s say,” he pauses rubs his chin, “You know,” he flicks his wrist, “get money from white people in America?”

I am giggling on the inside at his question for so many reasons. I try to respond by saying honestly in my head…

I don’t know, buddy! I’m trying to figure out the same thing! Especially after visiting Ur’kungu school where the only water available is 8km, and it’s too salty to drink! They need a well, which is going to cost thousands of dollars that we definitely don’t have in our budget, yea, so when I figure that out I’ll make sure you’re the first to know! Right, because you’re a total stranger, but I’m sure you deserve white people’s money just as much as we do!

But none of that comes out of my mouth. Instead I take a deep breath. Whatever I muttered or offered nonverbally, he moved on to his next request.

“You know white people in America are such good people. I want to go there. If you wrote me a letter of invitation, I’m sure I’d be allowed to go there.”

And with this I unload, “You know not all Americans are nice people. As a matter of fact, we’re not even close to being as friendly or as hospitable as Kenyans. Good luck. I could write you the most perfect letter, and they won’t let you come. You’ve see the news right, our country has a policy now about this. Our government isn’t exactly friendly to foreigners!” And I know I’ve gone overboard.

Go ahead roll your own eyes, shake your head, but please don’t lecture me. I know what I’ve done here, and I am in fact human.

He laughs a deep chuckle and mutters something about Donald Trump and his “sh-hole countries” comments.

So I apologize. I tell him he would have much better luck visiting Canada. I’m being sincere. One of our best friends here in Kenya has tried for years to come to the US with all the letters and every good and pure intention, but was able to easily travel to Canada this past year. I tell him that, and he nods, I believe in understanding. I wish him luck. I pretend to try to remember the website he quotes me about his project.

Andre comes running out of the shop and almost knocks me off the step in his enthusiasm. I inspect the zips again, shake the stranger’s hand politely and give him that sympathetic nod.

“I’ll let you know when I find the secret to getting white people’s money,” and I’m hopping on the back of the motorcycle, headed to my next stop.